India is a place where you feel like you should stick to a set of rules to help you get through unharmed and safe. I, for one, went with a huge list of dos and don’ts. Did I stick to them? No, not really. For the most part I was sensible but I feel like there’s just some occasions where you kinda have to say “f*** it” and just do it. You may only be there once in your life and if you don’t think you’re actually going to die from taking part in said activity then you’re definitely going to have a great story from it. So here you have it…

Eight things not to do in India (and why you should do them all anyway)! 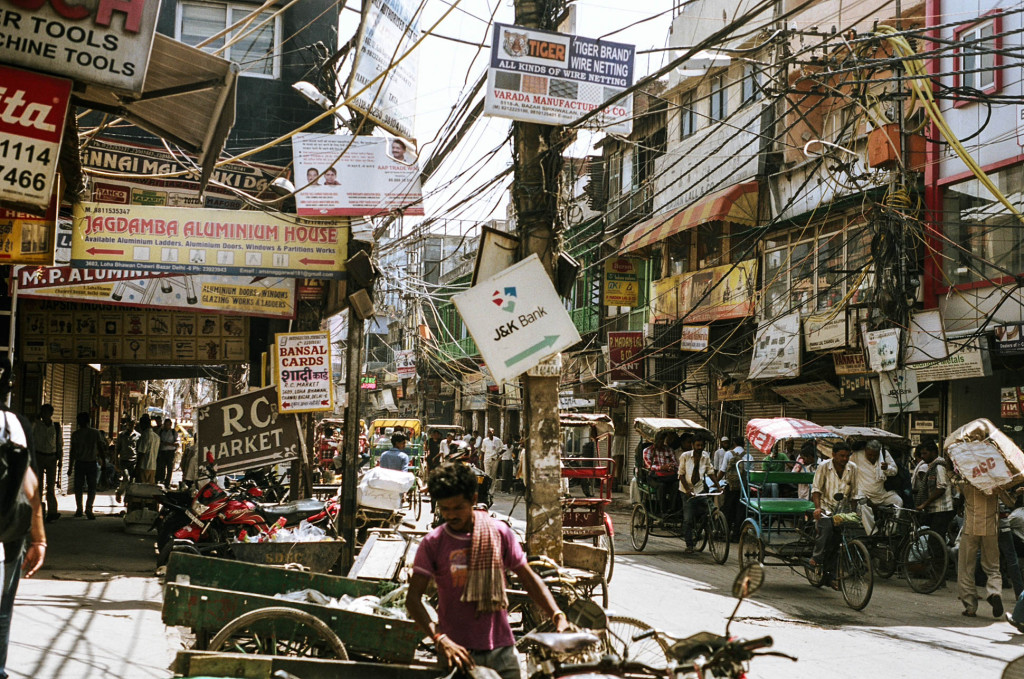 Ah, rule number one of childhood. Don’t speak to strangers and certainly don’t get onto or into the back of their moving vehicle. Rule number one broken when presented with an “Indian Helicopter” to take us to a local tailor. All in the name of fashion. Sorry Mummy but it really was imperative that I have my beautiful, silky shirtdress tailored. If you’ve visited India then you’ll know how completely chaotic the traffic is there.

It’s certainly not traffic you want to be perched on the back of a moped in, although you will definitely see at least a family of eight on one at many points during your visit. It’s more the type of traffic you want to be strapped into your car seat, in the back of a HUGE car, wrapped in ten duvets in case your mode of transport veers into a tuk-tuk/cow/moped/person. When we were presented with a moped to take us from the fabric shop to the tailor we were definitely more than a little reluctant to get on but then the naughty, adventurous side of me crept out and the next thing we knew we were whizzing through the streets of Varanasi with a man we’d met ten minutes prior. Most importantly: we lived and here I am typing this now! 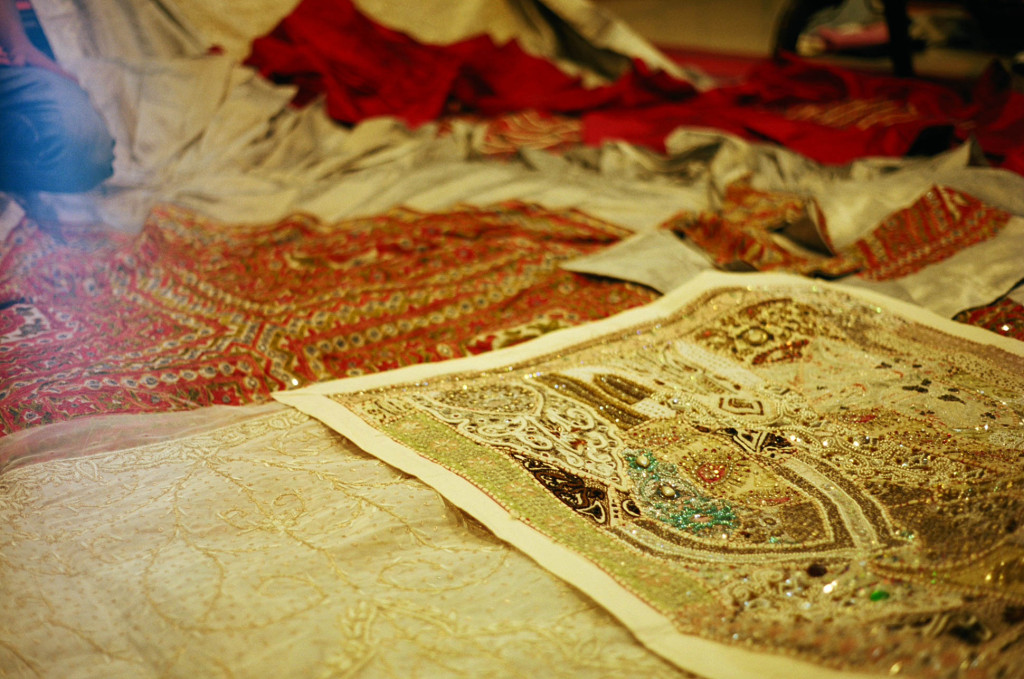 You’re always told just ignore or say no to any men approaching you from market stalls because you’ll get trapped into buying something. But I mean… What if you missed out on the most incredible treasure trove of a store because you were too busy saying no? I feel like sometimes you definitely have to give the poor guy a chance to show you whatever creations he has hidden in his rather dusty store.

I found one of my favourite purchases from following a man to his store. If at any point during this following you feel uncomfortable or as though it might not be quite what you thought then obviously retreat and retrace your steps. However if you’re in a busy area, the likelihood is that he really does just want to sell you some scraps of fabric sewn together! You’ll probably also get a free cup of chai out of it. Win, win. 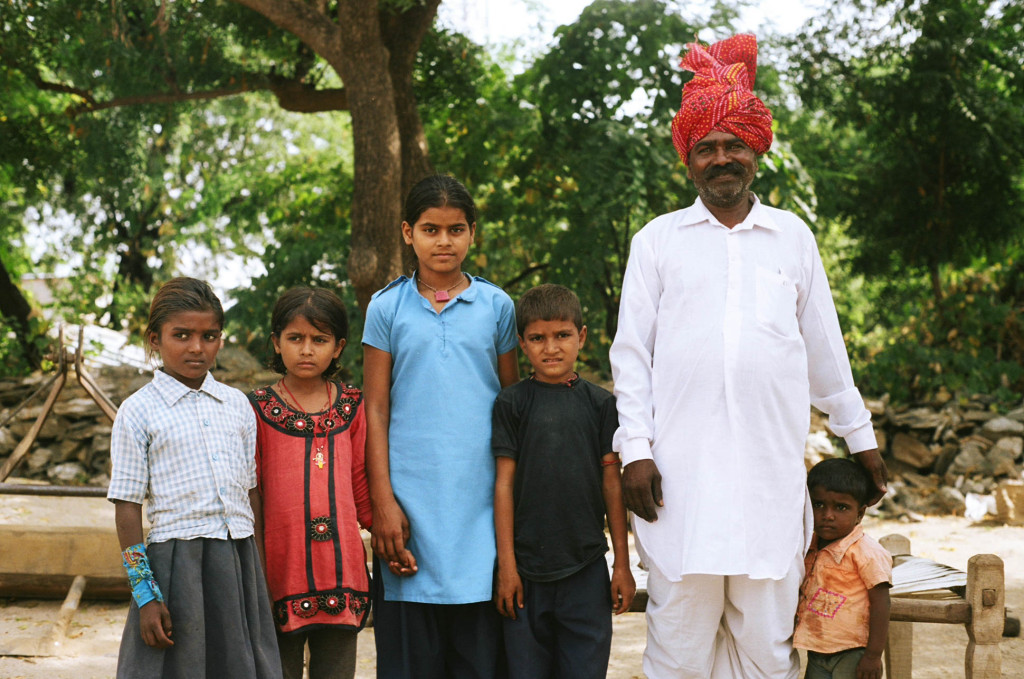 3. Engage in conversation with every person who speaks to you

My travel companion will be able to testify at how appalling I am at not replying to every person that speaks to me. In London I am probably (I say probably, I am definitely) one of those really bitchy, horrible looking girls, solemnly marching down the street, not so much as glancing at anyone around me.

Ah, the curse of the resting bitch face! In India, some friendly person appears, unbeknown to me. She says hello, she smiles, she probably accepts too many offers to look at people’s shops and engages with too many street children, but do you know what? When you travel it’s actually kinda great to be like that, you’re on a constant mission to push your boundaries, experience the extraordinary, see as much as your eyes can possibly take in and meet people who are completely different to you.

So while on some occasions I should probably be a little less engaged, as it can lead to you having to back out of a shop while handing back precisely 1000 different scents of incense that you decided you no longer like, for the most part you shouldn’t be afraid of engaging with those around you and meeting new people. Within reason of course. Maybe you’ll even discover you like it… well at least like it in some far off land that you don’t get to experience on a day to day basis. 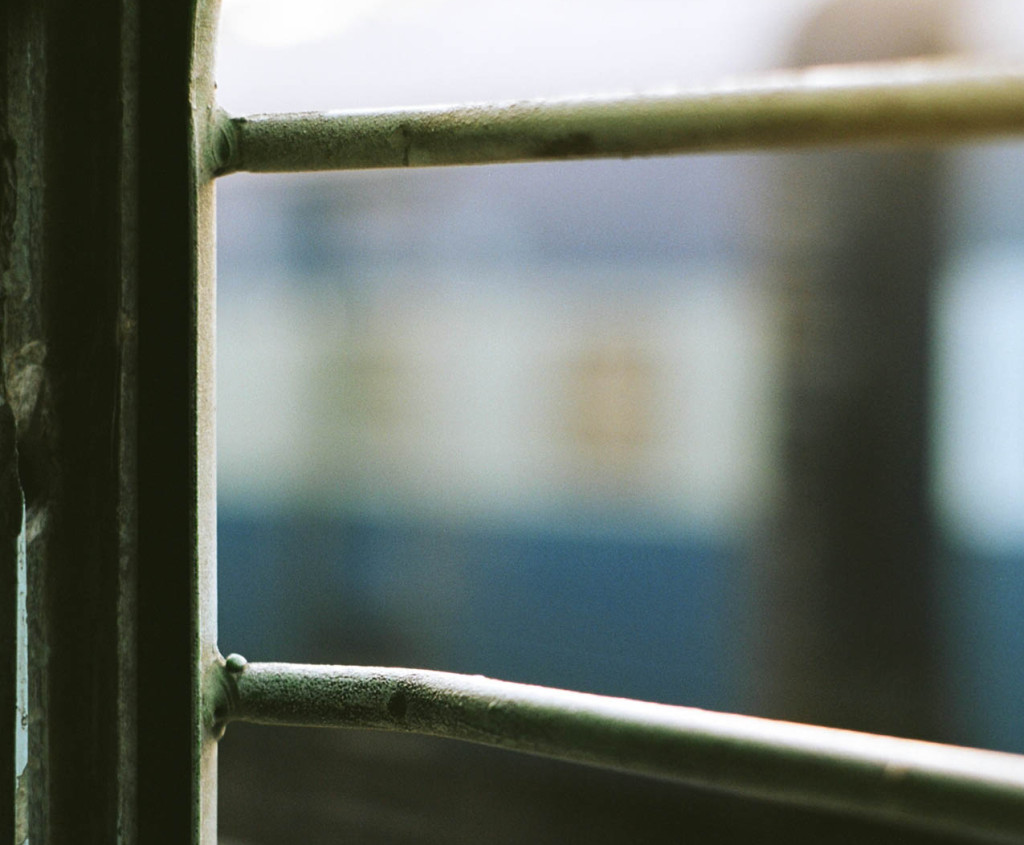 4. Accept food from locals on the train

My behaviour towards hygiene and food while we were travelling in India was more obsessive than I knew I was capable of. I went armed with disinfectant, anti-bacterial spray, wipes… you name it, I had it. I also ate completely vegetarian for the 3 weeks we were there because I didn’t want to risk food poisoning or being ill for any of our time there. I have to say, my efforts were rewarded as I didn’t get ill once!

However, there was an occasion we were sat on a day train on our way to Pushkar when an elderly couple opposite took an interest in us, and despite neither side being able to communicate properly through the language barrier, they took it upon themselves to welcome us and feed us throughout the journey. Despite us insisting that they should enjoy their lunch, they were insistent on us joining them.

The food was delicious, I ate the best chapatis on the whole trip on that train. Afterwards they were chopping up apples and cucumber, we were both a little dubious having been told not to eat fruit/vegetables uncooked with skins. However not wanting to be rude we ate it anyway. Needless to say, we were absolutely fine and it was amazing to feel so looked after by relative strangers. That’s one thing you’ll learn while you’re there, it’s almost offensive to say no to hospitality. 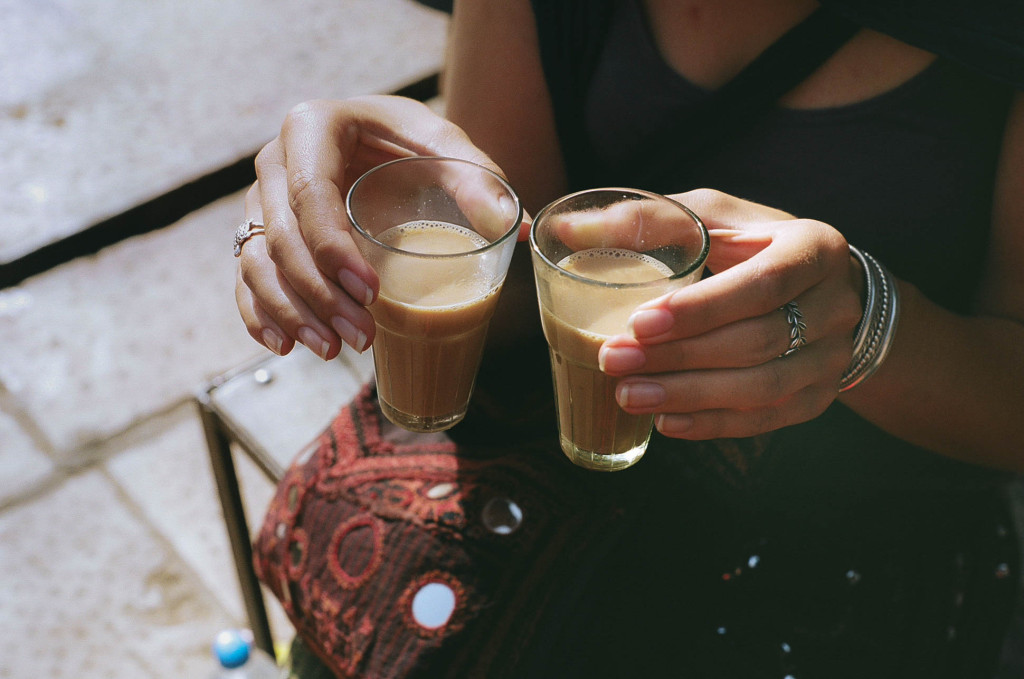 There’s a rather hilarious story of one of my dad’s best friends deciding to eat meat from a street vendor on his way to the airport on a trip back from India. He spent the entire duration of the flight including take-off and landing on the toilet.

So with this in mind I was a little more than cautious about trying street food while I was here. As a rule of thumb, look to see the vendors where lots of locals are eating from or if you’re with a guide, ask about the stands that they recommend and you’ll be fine. Eat food that you can see is fresh and hot. I had a number of really delicious meals from food stands while I was there, so ignore your instincts and try it out. You also must ALWAYS get the chai that’s being served on the side of the road, it’s so delicious and it costs between five and ten rupees for a glass or cup. 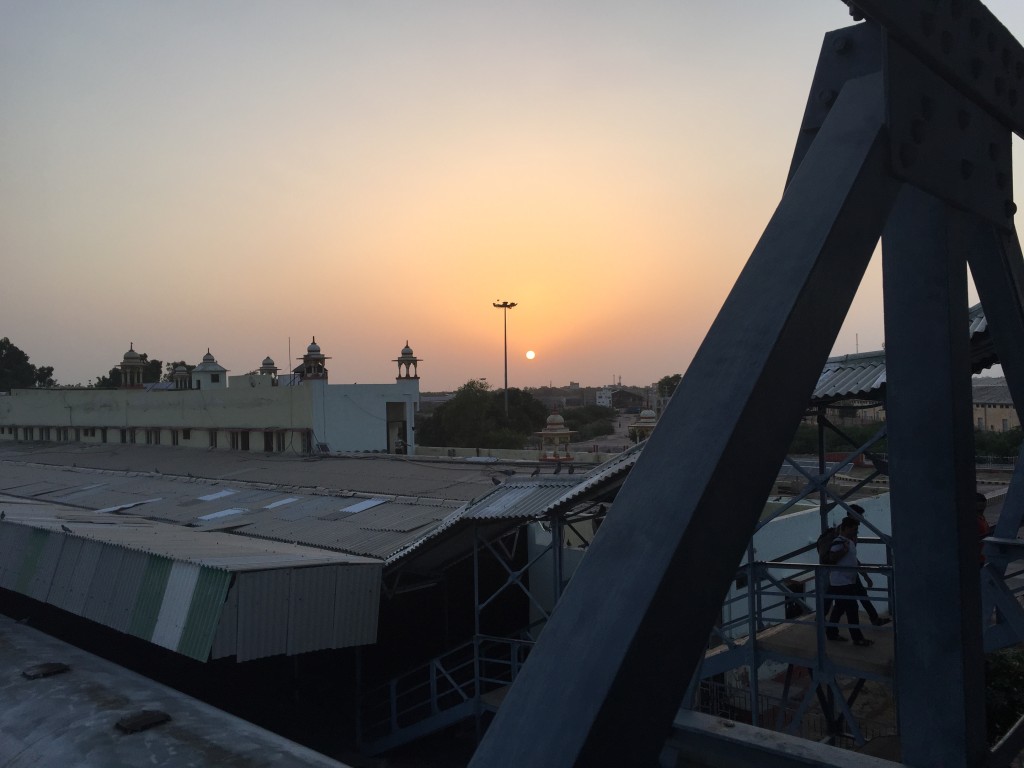 6. Get an overnight train

This is truly an experience I will never forget. We didn’t travel in first class, we were in third. Third means that although there’s aircon, the carriage is completely open, and you’re not in compartments. You’ll most likely be sharing with Indian men, most of them will probably smell and the toilets are far from desirable.

I actually started my 22nd birthday on an overnight train, which was something in itself I won’t be forgetting. However, despite these things, you have to get at least one while you’re in India. If you’re with a friend it’s hilarious and the beds are actually surprisingly comfortable. It’s also a really efficient way to get from one place to another, plus, in the morning the likelihood is, you’ll be waking up early so you will be able to catch the gorgeous sunrise as you speed through the Indian countryside. 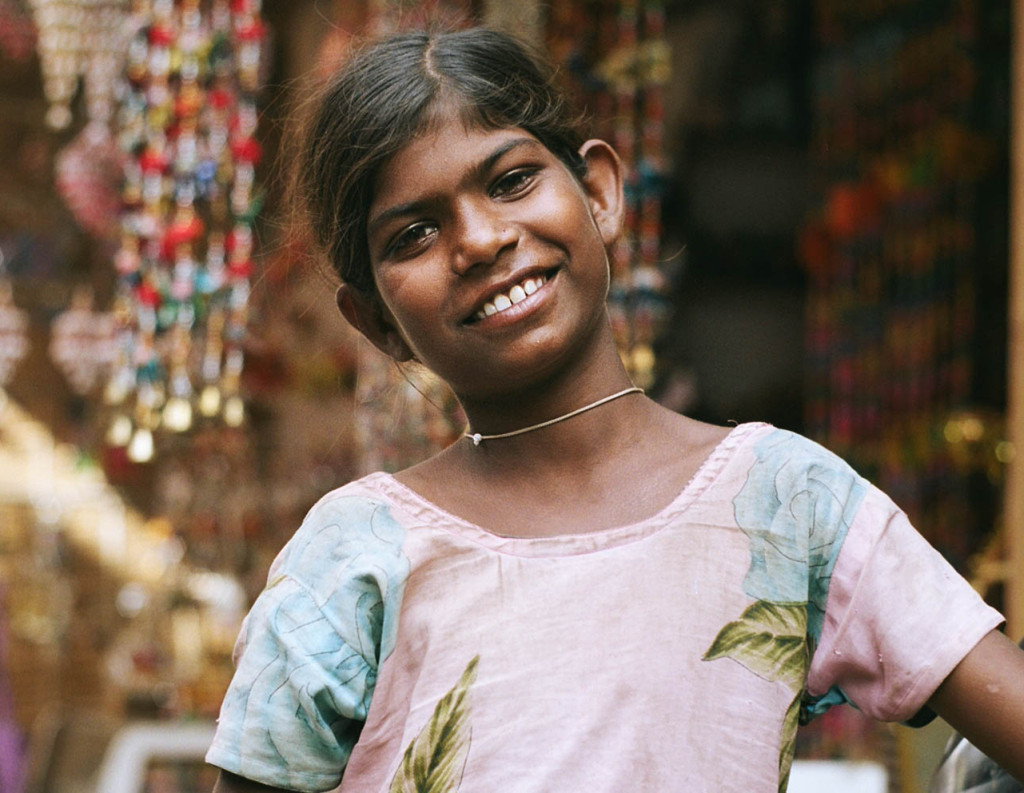 7. Give to those begging

This is a tricky one. You’ll see sights in India that you won’t see anywhere else. They’re heart-wrenching and you’ll want to do everything you can to help. However, we were advised not to give money. Often the money will be spent on drugs, alcohol and on things you didn’t intend to contribute to. If you do want to help, giving food is the best way to go about it. There were a number of occasions where children will be asking for chapatti or money on the streets. I found myself giving any snacks I had on me to children if they were asking.

So while you shouldn’t really give money to those begging as you may end up drawing a crowd, giving food to those you want to is the best way to help. This beautiful girl was asking for food so I told her I’d buy her food if I could take her photo. She was so sweet and I wanted to capture her portrait to remember the conversation I had with her. It’s little moments like that that make India so special. 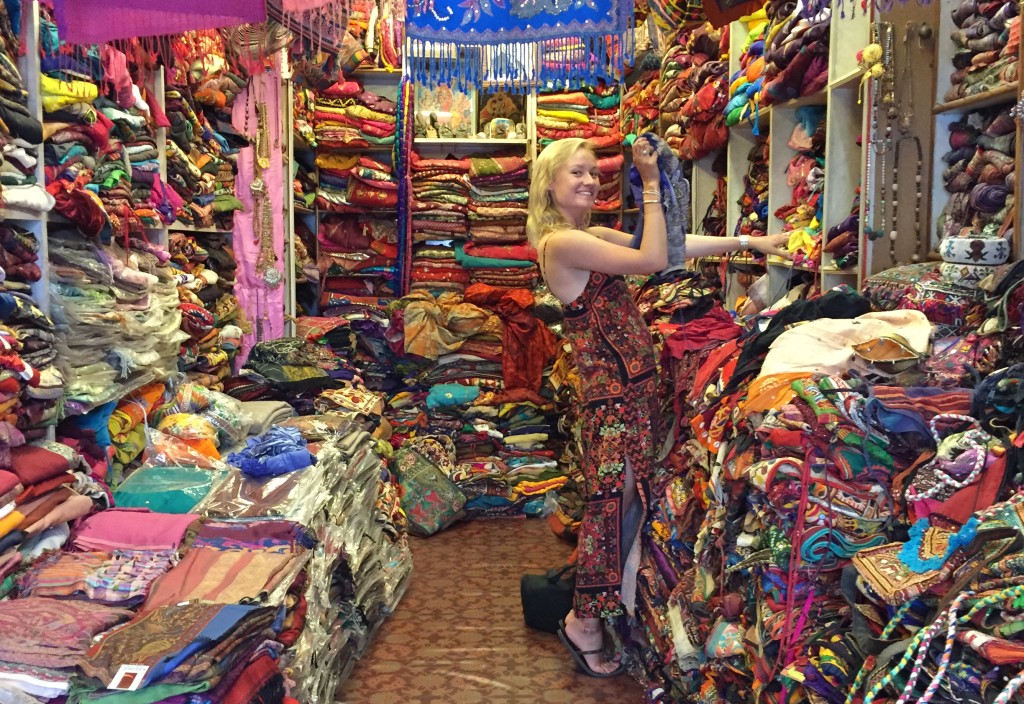 You may be thinking $2 is definitely not going to get you good quality clothing… and you would be entirely correct in that thinking. You will definitely not be getting good value clothing. BUT what you will be getting are fantastic coloured, comfy harem pants that you can bring back to England to remember your trip. They also make fantastic presents because who doesn’t love a pair of lounge pants printed with fantastical combinations of elephants, camels and flowers. No one, that’s who. So while you may not be getting value for money you’ll be bringing home bundles of colour to give to your friends / keep for yourself. I think that’s the best 80 pence you can spend.