My idea of dreams coming true is when two of my greatest passions collide: travelling and baking. You might have noticed many more recipes and sweet treats making their way to my blog recently. Especially since I opened my dessert restaurant Charlie’s Dessert House late last year! And now I make an annual trip to Paris for training, hence this story on the best French pastry class in Paris.

The idea in opening my restaurant was to focus on bringing sweets from around the world back to my hometown and fulfilling my passions for pastry in the meantime. But because I still love travelling and want to keep exploring while the opportunity is there for me, it has been a bit of a juggling act between my two passions.

Recently I booked a trip to Paris for both of these passions to come together in one place, which also happens to be the centre of pastry for the whole world! This is where you can take the best pastry class in Paris if you’d like to learn from the best!

My Macaron Pastry Class in Paris

Prior to my class, I have already been making macarons for the shop, however, have found myself becoming inconsistent and wanting to ask a professional all the ins and outs of macaron making to ensure our bite-sized treats are the best in town.

The class I booked was €99 for a three-hour macaron class at La Cuisine Paris. This seemed a fair price to pay for three hours of quizzing a French pastry chef, so I happily obliged and booked my course for a Thursday morning, followed by a croissant making class the next day.

Step One: Prepare Your Fillings

While I believe the only way to get a really good idea of macarons and their secrets is to take a class or learn from a professional, I’m going to do my best to recount the class and provide some tips for you to help improve your macarons skills at home (plus with the new video, you’ll be a pro in no time!)

The first thing we did was to measure out ingredients (mis en place) and begin preparing our pastry creams and ganache fillings for the different flavoured macarons.

Because the quality of the Italian method macarons is that much higher, I was delighted to learn the ins and outs of getting the recipe correct to produce perfect macarons (and thus will never revert back to the French method!)

Another important note is to always sift your almond meal + icing sugar mix and to discard the large parts of the mixture. I have read in many recipes to do this twice or three times, however Guilleme, my pastry chef teacher, assures me once is enough.

The next step of the Italian Method (which I’ll provide the recipe for soon on the blog – promise!) is to create a paste with egg whites and the almond mix. Guilleme then allowed us to choose our colour and incorporate this into the mix before the hard part begins.

This is by far the hardest part about making macarons and where most budding bakers go wrong. The important thing to note (which will be much easier to demonstrate in the upcoming video), is not to overmix your batter. Using a folding technique you should fold only 8 or so times before checking your mixture and shortly thereafter it will be at the “lava” stage, ready for piping.

One of the areas I never thought I failed on is piping, however, there was a key mistake I have been making that Guilleme corrected for me and will result in much better macarons for Charlie’s! My issue was to release the bag and lift to soon, not allowing enough time for the macaron to disperse itself (if anything, macarons are about patience!)

The purpose of this blog is to give you a little insight into my masterclass and hopefully encourage you to book your own when in Paris – I really did learn a lot! The next day I went back to learn how to make croissants and breakfast pastries, which was also a great class and a quick way to learn techniques from the pros themselves.

I would absolutely recommend this class to anyone interested in making macarons like a pro and only wish I had more time in Paris to continue learning French pastry skills!

Afterwards, Guilleme gave each participant a map with an extensive list of pastry equipment shops, patisseries, foodie finds and all sorts of insider secrets to Paris (many of which you will see recommended on this blog). If you’re a baker or aspiring to own your own bakery one day, this has been one of the best ways for me to master my skills and learn quickly on the spot. Highly recommended! 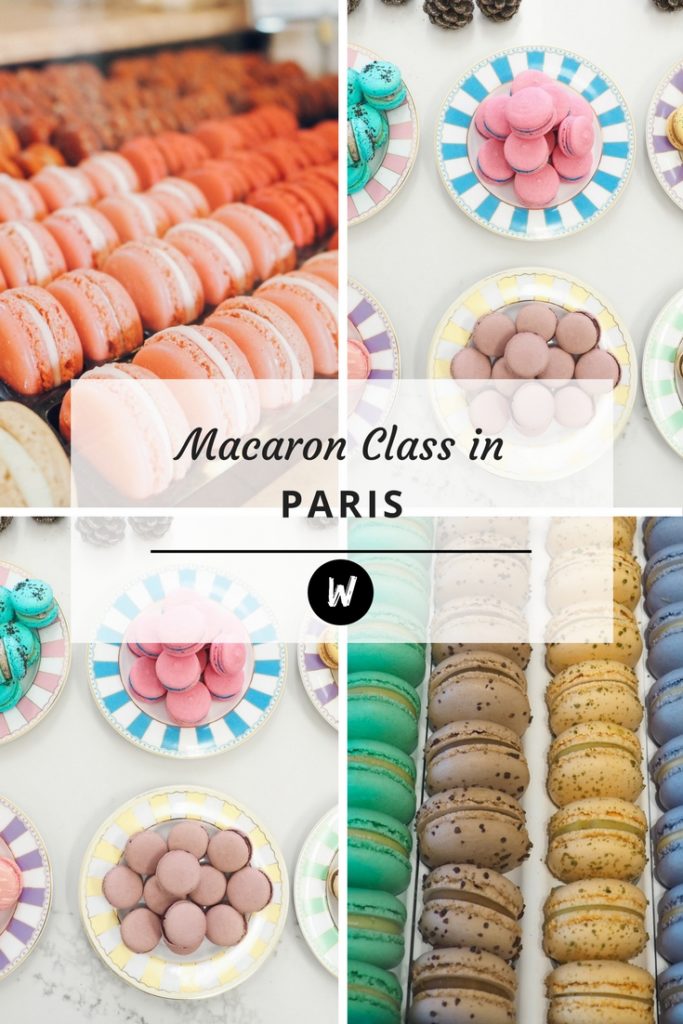