Oktoberfest, Germany’s largest festival and one of the most spirited parties in the entire world, just kicked off this past weekend in Munich. This beer festival has become an annual tradition that dates back to 1810 when Bavarians celebrated Prince Ludwig’s marriage with huge festivities. Attracting crowds of over 6 million every year, this 16-day event is a huge drawcard for international visitors. If you’re planning to experience this iconic event, you need to know a few things. Here at WOW we’ve put together a list of 10 things you should now before going to Oktoberfest to help you make the most of your visit (Image via). 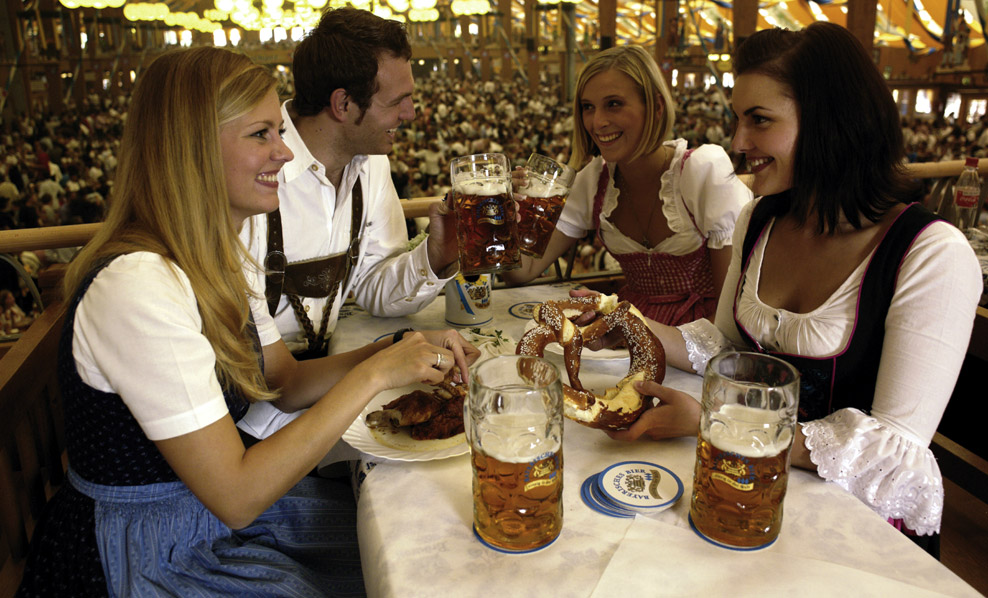 1. When does it take place?

Despite its name, Oktoberfest actually begins in September. The dates of the festival change every year, but in 2015, it runs from 19th September – 4th October.

2. You’ll regret not dressing the part

One of the most fun things about attending Oktoberfest is dressing up! Locals and visitors alike choose to suit up in Trachten, which is traditional German attire. For men that means sporting a pair of leather Lederhosen with suspenders and for women, a Drindl. In fact, you’ll feel out of place if you don’t dress up! There are a number of stores that sell Bavarian attire in Munich, but it can be expensive. Try to find a second-hand outfit for a cheaper price.

3. The beers are huge

The standard size of a beer at Oktoberfest is one litre and costs 10 Euros. All the beer served comes from six Munich breweries and is widely held as some of the best beer in the world. Remember to shout ‘Prost!’ (cheers) and look your friends in the eye before drinking; an important custom in Germany. If you don’t like beer, you can head to the Weinzelt (wine tent) where you can choose from 15 different wines or enjoy the carnival atmosphere outside of the beer tents. 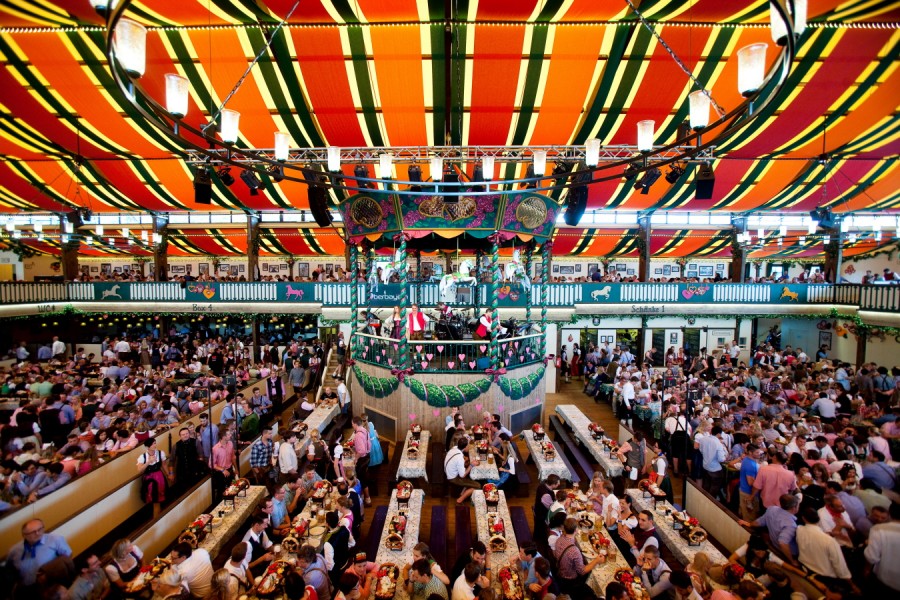 As this is the most iconic festival in Germany and is a huge drawcard for both Germans and international visitors, Oktoberfest is exceptionally crowded. To avoid the most crowded times, visit on a weekday, avoid October 3rd (a German holiday) and line up outside the tents before they open at 10am on weekdays or 9am on weekends to secure a seat. Often, the tents become completely full by 11am, after which you’ll need to wait in line for people to leave before you can enter (Image via).

5. Soak up the beer with some traditional German delicacies

There is a lot of hearty, traditional German food on offer in all of the tents at Oktoberfest, including wurst, roasted chicken, pork knuckle, goulash, smoked fish and giant pretzels. If you’re vegetarian or vegan, don’t fear. As the event has become more and more international, organisers are beginning to cater to the dietary needs of visitors and you’ll now find some meat-free options available, like Käsespätzle, a traditional noodle bake. Make sure that you eat regularly over the course of the long day.

6. Make a reservation for large groups

For a small group of only two or three people, you probably don’t need a reservation, but for larger groups it is useful to plan in advance and make a reservation directly with the tent you want to sit in. Be warned though, some tents begin taking reservations as early as January! 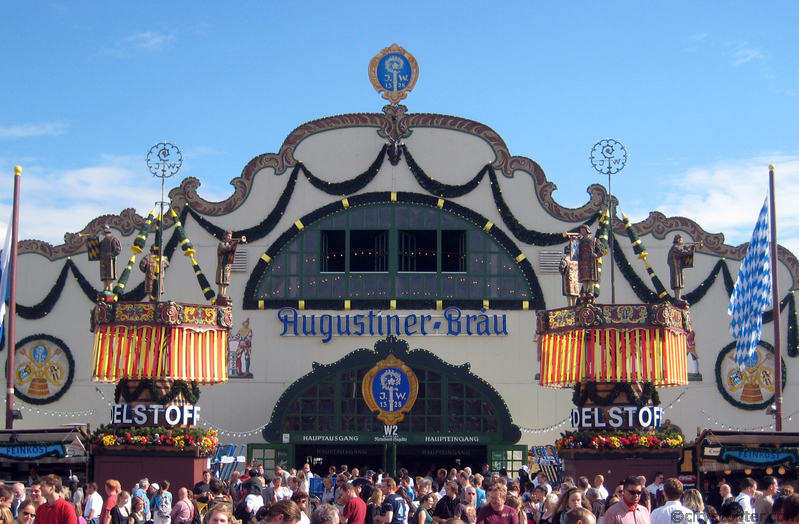 There are 14 tents in total and all of them have a different personality and charm, leading them to attract different crowds. Some of the tents are enormous and can hold upwards of 10,000 people! You should try to experience a number of different tents, but the busy crowds mean that it’s better to stay put in one tent over the course of the day. If you’re visiting over a number of days, try to experience a different tent each day. Many people love the family atmosphere of traditional tunes of the Augustiner tent (Image via).

8. Be prepared to sing and dance

As the mood becomes increasingly festive, you’ll notice that many people beginning to sing, swinging their beers and dancing on their benches. This is allowed and is quite normal. Popular drinking songs include the repetitive ‘Ein Prosit’ and ‘Fliegerlied’. Also, no Oktoberfest is complete without partaking in the Chicken Dance, which has been a festival tradition for over twenty years. Join in the fun yourself, but remember to never dance on the table, which is actually against the law!

Tipping your server 10-15 % of the total bill each time you order will ensure they will come past your table more regularly to take your orders and keep you happy. No surprises there! 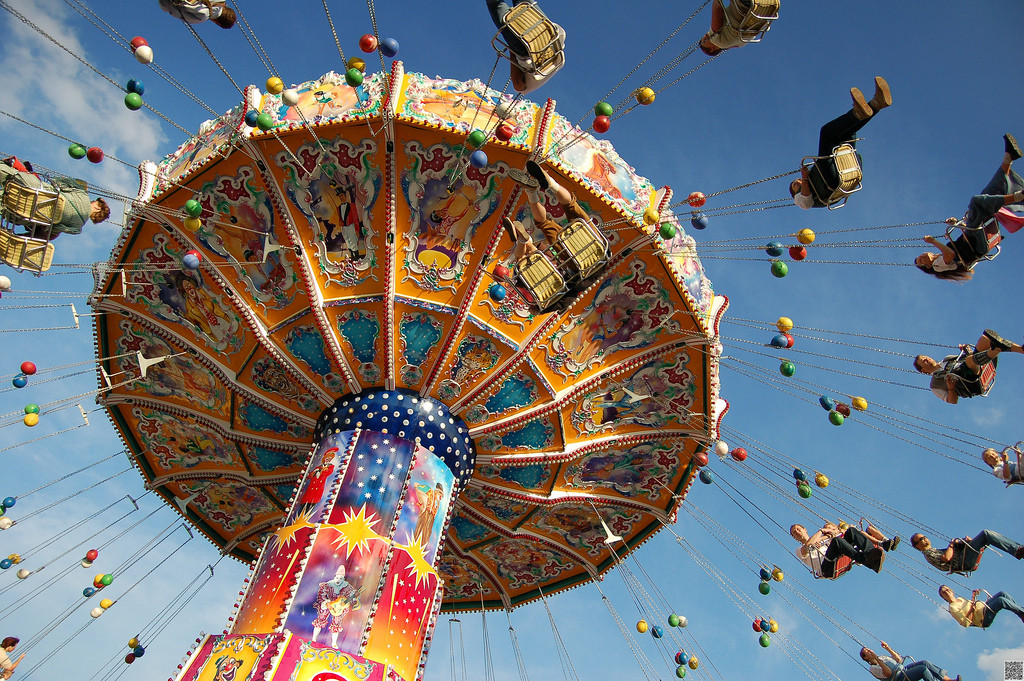 10. There is more to Oktoberfest than drinking beer

Oktoberfest is a huge carnival complete with rides, vendors and games, so even if you don’t enjoy drinking beer, you’re sure to have a great time. Ride the ferris wheel, rollercoaster, ghost train or test your skills shooting with airguns or popping balloons with darts. Kids of all ages (including big ones), flock to the Oktoberfest carnival for entertainment of all kinds (Image via Flickr Creative Commons).

Have you experienced Oktoberfest? What are your tips on making the most of the festival?